“Yaoyuan, your second cousin is coming to live with us, remember to pick him up at 2.” A man’s voice, the ring of a telephone, the sound of a door closing.

“For how long? Dad!” Yaoyuan shouted in anger: “I don’t have time today! Why didn’t you tell me earlier? What second cousin? Don’t tell me he’s from the countryside!”

The summer break homework was abandoned unfinished, school was starting in a week, and today he had made plans with a classmate to go buy new study materials from the book store.

Yaoyuan played a video game for a while, turned it off, glanced at the clock. 12 o’clock.

Before leaving, he saw the memo on the fridge. His dad had left it. It noted a name, the person he was picking up was “Tan Ruikang,” and a bus number. No phone number.

That should be obvious. A cellphone costs several thousand yuan, even Yaoyuan himself used his dad’s Nokia 8310, how would a second cousin from the countryside be able to afford a phone?  They don’t even have a pager.

From a rural village in Hunan… Yaoyuan’s mother’s last name was Tan. Tan family village, Yaoyuan remembered that he had been there when he was very young. That year he was only five years old, and Mom was sick. Dad had taken her to Beijing for treatment, so Yaoyuan had been shipped off to his grandmother’s house. It seemed like there had been a second cousin there who often took him to play, he’d even almost drowned once in the water. Second cousin got beaten by Grandpa for it once they’d gone home.

It was during the summer he was five, Yaoyuan didn’t go to kindergarten; that year dad had called the village, seventy-five-year-old Grandpa took him to the bus station on his bicycle, the uncle waiting there for him took him to the county town to transfer. When he got home, his mom couldn’t even speak anymore.

That year, he had left in a hurry, his second cousin left for school, and there was no phone signal in the village. Not long after Yaoyuan came back, he’d forgotten all about the countryside. A couple days later, Mom passed away, Dad spent his days raising him, so these couple of years, they haven’t been in contact with the old family.

A few days ago Yaoyuan came back from karaoke with his classmates to find his father on the phone in the middle of the night. Immediately he thought of his dad finding a new woman, and out of nowhere picked a fight with his dad. Only then did he find out that it was a call from his grandmother, so he could only drop it in embarrassment.

Yaoyuan was a possessive person, he absolutely refused to let his dad remarry. Often, he’ll throw a fit over the smallest things, never apologizing even if he was wrong, refusing to eat, locking himself up, until his father gave in. He lost his mother very young, so his father almost always went along with him. The temper that resulted from this indulgent behaviour gave many a headache to his own father. His son didn’t understand empathy, but the father was very busy with work and didn’t really discipline his son, nor did he understand adolescent psychology, so the only solution was to give money.

Fortunately, Yaoyuan was the kind to be meek in public and a tyrant only at home. He’ll act out his princely temper at home but remembered to be tactful outside. After all, his dad will give in to him, but others won’t necessarily concede. If his prince syndrome starts acting up, others might not provoke you, but they sure can isolate you. This immature young man didn’t have many friends in elementary school, but he learned in middle school. He can bully his dad, but not his classmates. Having fixed his temper, Yaoyuan had a naturally good appearance and money at home, so when it came to eating and playing he was always generous. Middle schoolers admired rich classmates the most, especially those that are rich and easy-going.

When his dad took him out to eat, Yaoyuan would also know to be polite to the elders. Others would praise him or tell him he looked like his mother, and he’d just smile and listen.

Yaoyuan was handsome and rather witty, loved his reputation, had good taste in clothes and food, played hard but his grades never slacked, and was the Cultural Recreation Representative. He had almost all the advantages.

August in the south was crazy hot; the sky outside was dark, it was so humid it made people sweat so profusely their shirts stuck to them. Upon entering the book store, the air conditioning immediately made him feel much more comfortable. It’s almost the third year of middle school, he needed to buy study materials. Yaoyuan flipped through the books, he threw them all into the car whether they were useful or not—his dad, Zhao Guogang, took study supplements very seriously, the more he bought back the more his mind would be eased.

“Ugh, my old family also visits often.” Hearing Yaoyuan’s complaints, Lin Zibo, a classmate who came to buy books with him said in sympathy: “Once they come it’s three months before they leave. They say they’re looking for work, but once they’re here all they do is sit on the couch, watch TV, and eat; my mom gets super annoyed.”

Yaoyuan replied: “What can I do, after my mom died we stopped contacting that side of the family, and I still have to go pick him up later…”

Muffled thunder sounded outside, the two figures looked up towards the transparent glass wall of the book store. The sky was dark and heavy, as if it was about to rain. Yaoyuan hung off his classmate’s shoulder, lazily lined up in front of the cashier. Summer was almost over, there was a mass of students looking to buy books. Standing next to Yaoyuan, Lin Zibo looked like a prop—in reality all his friends looked like props next to Yaoyuan.

Yaoyuan’s clothes were bright and neat, although his looks were still young and tender he was cleaned up very nicely. His eyes were filled with an aloof energy, when he flicked his fringe there was an arrogant aura of “strangers keep away.”

Yaoyuan disinterestedly sized up the girl: “Uniform’s from a foreign language school, her skirt has been trimmed…”

As he was speaking, Yaoyuan’s phone rang.

More muffled thunder sounded from outside. It had started raining, a downpour coming down. The cash register in the bookstore was in disarray.

“What?” Yaoyuan’s tone was a little annoyed: “Speak up!”

The other side said: “Is it uncle? I’m Tan Ruikang!”

Yaoyuan remembered, and grabbed Lin Zibo’s wrist to look at the watch—2:30.

“I don’t have time right now!” Yaoyuan said: “Get a ride over yourself! Are you at the station?”

Yaoyuan gave him the address, another clap of thunder sounded, he didn’t know what the other side said, Yaoyuan couldn’t hear properly, the station on the other end was very noisy, and his bookstore was also very loud, so Yaoyuan hung up.

The line was moving very slowly, Yaoyuan got tired of waiting. On one hand his attitude on the phone just now wasn’t very good, on the other he was afraid of getting yelled at by his dad. His brows pinched into a knot, Lin Zibo then said: “How about I buy it and give it to you when school starts?”

Yaoyuan glanced at the pile of things the two had, if Lin Zibo had to carry all that he’d be tired to death. He said: “It’s nothing, I’ll wait for you.”

They waited for half an hour, finally finished buying the books at three o’clock and left. Outside the bookstore stood a bunch of people without umbrellas, all flipping through books. Yaoyuan went out to call for a ride, throwing himself into the rain shouting: “You go first!”

Lin Zibo: “What about you?! Let’s go together!”

Yaoyuan waved his hand, indicating he should hurry and get in the car, stuffed twenty yuan into his hand, then turned and ran towards another car. Pulling open the door, he said: “To the bus station.”

Yaoyuan got off at the bus station in the downpour and got soaked like a drowned rat. He didn’t bring his father’s note, but there was only one bus coming from the old village every day, so he found it quickly after asking around.

There was nobody at the platform entrance, Yaoyuan stood dripping on the platform and smoked a cigarette before calling for a ride home.

The rain had stopped by the time he got home, the rain here came fast and hard but left just as quickly. The sky was still dark and heavy, but the air was a lot fresher.

Yaoyuan lived in a multi-storey neighbourhood. He went to ask the security at the door, and the security guard said: “Is it your relative? He came in, he even called your dad.”

Yaoyuan’s heart made a thump in his chest. It’s over, he’s going to get yelled at tonight.

He ran up in a rush, couldn’t wait for the elevator, directly took the fire escape stairs to the third floor, and saw a person standing in front of the apartment door, looking like the rain hadn’t caught him at all.

That person was carrying a gray travel bag, just like a migrant worker going into the city, one strap on each side, the travel bag’s two handles were pulled over his shoulders, a gray baseball cap that clearly used to be white on his head, wearing a short-sleeved sports shirt and neon green uniform pants. Two white stripes ran down the edge of his pants, a pair of Warrior shoes, and his hair looked dirty, it was greasy and sticky.

He was skinny but fit, had a good appearance, and was taller than Yaoyuan by a head. His skin wasn’t as dark as before, more of a healthy bronze colour, his eyes and brows were both very attractive. Yaoyuan remembered a long, long time ago, the photo of Grandpa in the army hanging in the central room.

He didn’t know why, but the photo of a young Grandpa had always been sharply carved into his mind. Second cousin’s lips, nose bridge, sword-like brows, were as if they were made from the same mould as Grandpa.

This chapter is migrated and/or formatted by our fellow chicken enthusiast(s), Kapsoura. 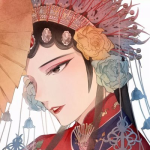