January 20th, 2022 - Every JJWXC chapter is password-locked for the time being. To gain access, please join our Discord here.
11 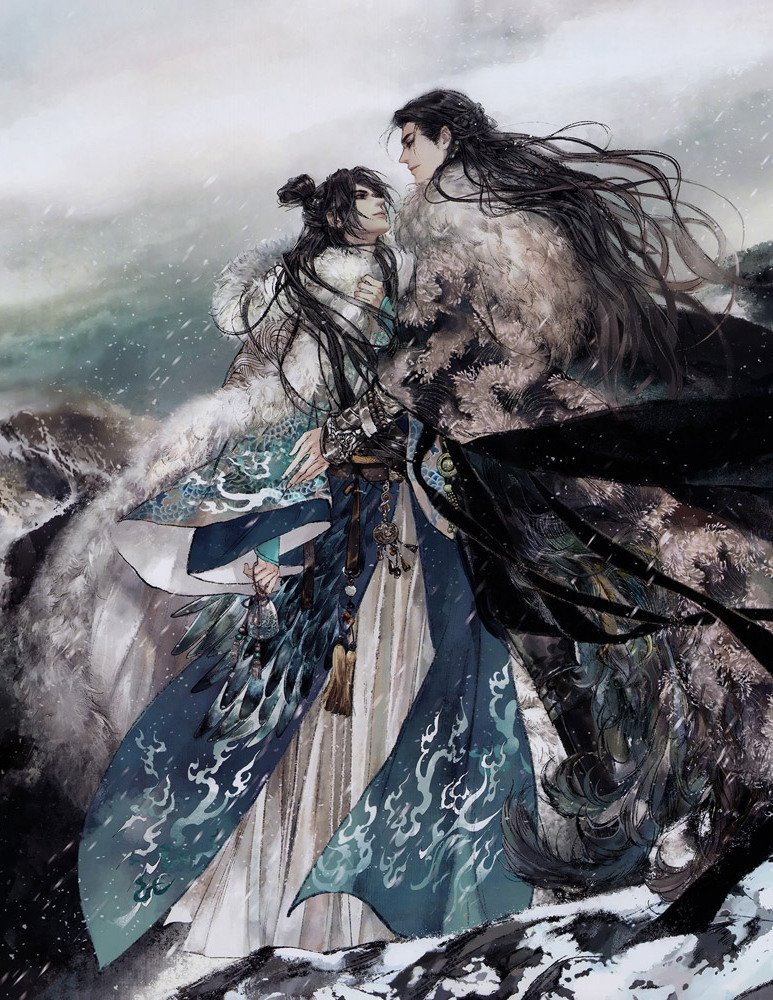 “Where you are is my place of solace.”

Always support our Chicken Lord by buying the original work whenever you can! Link for each platform's guide to purchase the raws can be seen on our FAQs.
Translator's Comment:

some more on the kun and peng mythos, from nam:

“IIRC the Zhuangzi, which is the oldest “origin” text (possible that the creature of kunpeng originated from an oral tradition) of the kun and peng, mentions that they are essentially one creature. I think the separation between kun and peng happens possibly thanks to the Buddhist Golden-winged Peng, like is the case with Qing Xiong. Either way, the similarities between the kun and the peng is largely philosophical, I think? Creatures so massive in scale they don’t exist in the same “realm” (of size but also scale) as smaller, lesser creatures, thus embodying the freedom, nature and harmony of a Daoist master.”

An update, from nam:

So I looked into it a bit more, and here is the details on the kun and the peng. Zhuangzi recounts a parable about a massive fish and bird, the kun and the peng, the details which you can look up on the Wikipedia page for the kunpeng. Anyway, he recites it from “3” sources, one of which is Liezi. There is a lot of discussions about the historicity of Liezi, but we won’t get into that; the important thing is, the story of kun and peng in Zhuangzi was that of the kun turning into peng, but in Liezi, they were simply two separate creatures that are mentioned side by side.

Another thing is the fact that the peng might have historically been another character for feng, or phoenix, possibly deriving from the same source bird totem and diverging with age. Other birds of massive sizes have also been described in later texts, implying that this creature motif isn’t rare. It’s not rare for myths and mythical creatures to get mushed into one. Later on, the introduction of Indian influence might’ve affected the trajectory of the peng; Garuda was imported as “the golden winged bird”, and later on, in Buddhism there is the “golden winged great peng”, aka our friend Qing Xiong. Feitian teases this development in Tianbao, where Hongjun thought about how Qing Xiong advocated Buddhism more than Daoism. (Zhuangzi is a daoist text)

In short: Zhuangzi might’ve just made up the whole kun turns into the peng story, thus implying that they are the same creature. Historically, the peng is its own being that developed in isolation from the kun, who is very rarely mentioned outside the context of Zhuangzi/Liezi and works influenced by it.


This chapter is migrated and/or formatted by our fellow chicken enthusiast(s), moon.

Reach out to me via the links to the right if you would like to re-translate any of my works. Please allow 2 business days for a response to an email or a DM.

Fic writer, editor, and translator for GHOFD, PUBG, Fanservice Paradox, and other projects.

“You have taught a very good disciple. Like you, he’s strong and decisive; he is also determined and has clear conscience… I am too cowardly, too hesitant, and merely a man at the death’s door… I don’t deserve him.”

— Haoran, Daji and I Are Fighting Over A Man Chapter 41