Xiang Shu had suddenly become very exhausted for some reason. Despite this, he was still clear-headed. Chen Xing supported him towards the backyard and let him lie on a sickbed in the Huichun Hall. Xie Daoyun checked his pulse before looking at Chen Xing in silence.

"Have you come into contact with anybody these days?" Xie Daoyun asked.

Chen Xing: "We had just arrived in Jiankang the day before yesterday. We did see a lot of people, but we didn't meet any... strange individuals."

Xie Daoyun asked again, "What did you eat?"

Chen Xing recalled that during their stay with the Xie family, their food and drink had been normal. Yesterday in Dongzhe, Xiang Shu also didn't drink the tea they had been served with, even though Chen Xing himself drank a lot. Later at night, they just drank wine in Feng Qiangjun's house, and it was impossible for Feng Qiangjun to have set them up.

Chen Xing replied, and only then did Xie Daoyun realize that Chen Xing was the guest at her little uncle's house.

Chen Xing held Xiang Shu's hand and injected the Heart Lamp into Xiang Shu's body meridians. Oddly enough, there was nothing unusual. "This can't be..."

Xiang Shu didn't fall asleep; he just raised his other hand and rubbed the space between his eyebrows using his thumb. Chen Xing said, "Xiang Shu, you feel sleepy ma?"

"Not sleepy," Xiang Shu frowned. It was just that he had no strength left. "Go back first ba."

At this time, Gu Qing came over with a bowl of thick medicinal soup. Chen Xing smelled a strong ginseng flavor. Xiang Shu said, "I don't need to drink this. I'm not sleepy. It's not the plague."

Xiang Shu appeared a bit irritated; he raised his hand to keep it away. Chen Xing, however, wouldn't let him off the hook. "I'll feed you, be obedient."

Xie Daoyun observed the relationship between the two people then looked at Gu Qing. Gu Qing smiled reluctantly and nodded to Xie Daoyun, meaning: "It's as you think." Xie Daoyun slightly frowned, as if a little worried.

Chen Xing knew that Xiang Shu didn't like to show his weakness in front of people, so he didn't force him. After Xiang Shu had drunk the soup, he felt refreshed right away.

"What herbs are inside?" Chen Xing asked Xie Daoyun.

"Ginseng root, gutta-percha bark, himalayan teasel root, babchi fruit..." Xie Daoyun looked as usual as she recited more than ten herb names in a row, all of which were tonics with strong yang attributes. "Master's prescription."

Xiang Shu got up after drinking the medicine; he didn't want to stay in the pharmacy any longer.

Chen Xing got up after him. In any case, what he had wanted to know, Xie Daoyun should've been able to roughly guess by now, and so, he could only apologize to her. Xie Daoyun also didn't ask them for the medicine fee. She asked Gu Qing to take the two men out, prepare a carriage, and send them back to the Xie residence.

"Are you feeling better?" Chen Xing was scared —— half for Xiang Shu, and half for himself. After all, in his mind, Xiang Shu had always been an omnipotent figure. It made him gradually forget that no matter how good his ability was, in the end, he still had a human body —— flesh and blood that had to eat rice, had to drink water, and had to sleep. When Chen Xing suddenly saw that he seemed to be sick, he immediately panicked and worried so much. Inside the carriage, he checked Xiang Shu's pulse all the time.

Xiang Shu was thinking and didn't answer Chen Xing. After Chen Xing had called him several times in a row, Xiang Shu returned to his senses. When he met Chen Xing's eyes, he was slightly angered. "I said, I'm not sleepy. You don't believe me?"

Chen Xing could only nod. He didn't know what to do at the moment and just hoped it wasn't a big deal.

"I was investigating Kjera's whereabouts around two years ago. When I moved south from Luoyang, I also encountered the exact same situation," Xiang Shu said. "It led to me being taken prisoner by the Jin army."

Chen Xing recalled; he had also been wondering for quite some time about that event. With Xiang Shu's level of skill, how on earth had he been caught?

"I lost all my strength in an instant." Xiang Shu frowned.

"What happened after that?" Chen Xing was surprised.

Xiang Shu thought out loud, "I don't know, maybe I recovered because I took your medicine, or maybe I had already recovered before I even met you. But since the Hans didn't provide food or water, I couldn't break free. After being caught and moved to Xiangyang, I was weak for a long time."

Xiang Shu raised his hand, trying to lift his broadsword. He was barely able to lift the sword; it was clear that his action was sluggish and lacking strength.

"It's like all of a sudden, my strength completely dissipates," Xiang Shu murmured. "What's the matter? Chen Xing, will you calm down?"

Xiang Shu frowned and said, "You look like you have the plague. Since I was able to recover last time, I'm sure this time is also the same."

Chen Xing calmed down a bit. "I... it's because I'm somewhat scared."

Chen Xing took Xiang Shu by hand. Xiang Shu observed him for a moment. Eventually, Chen Xing gradually calmed down and said, "Let's take a day off and see ba."

That very day, Chen Xing observed Xiang Shu's condition and suspected that it was some kind of disease that couldn't be rooted out. It made him more and more confused because Xiang Shu wasn't as sleepy as what Xie Daoyun had described. His expression remained the same, and he looked only slightly tired; perhaps, he wasn't suffering from the plague. However, it might also be because Xiang Shu himself had a strong constitution that the symptoms weren't as obvious.

That night, Chen Xing moved into Xiang Shu's room and slept with him on the couch. Early morning on the following day, Xiang Shu woke up as usual. Chen Xing said "thank god" to himself, got up, and pressed Xiang Shu's pulse; it was normal and beating steadily.

"How do you feel?" Chen Xing asked.

Xiang Shu got up, tried to lift the broadsword, then said, "Not good. It's difficult to even make a move. If an enemy comes, it'll be very troublesome."

Saying so, Xiang Shu and Chen Xing exchanged a look; both of them were aware of the danger. Chen Xing muttered, "Could it be them? Shi Hai's men have reached here?"

Xiang Shu said, "Maybe not. At least so far, none have come to trouble me yet. Perhaps, they haven't found out about my weakened condition and are still hiding in the dark. However, we have to be very careful and treat this seriously. After listening to what Feng Qianjun had said the other day, I kept feeling like something was wrong. It's impossible for Shi Hai to give up the South. He must've had Jiangkang in his mind as early as the war in Xiangyang."

At first, Chen Xing had suspected that the plague was related to Shi Hai. Even if Shi Hai didn't personally do it himself or by sending his men to Jiangnan, the spread of the plague was all caused by the drought fiends. Yet, a good deal of complicated information interfered with his judgment and made him think: Does this matter not have any relation with the drought fiends at all?

From the beginning, did I guess it the wrong way? Chen Xing began to perceive some kind of unknown danger hidden underneath the restless, bustling Jiangkang City. Assuming that Shi Hai's subordinate had already lurked in Jiangnan and was prepared to overthrow the Jing court that was content with its territory, yet the implementation of his plan wasn't as smooth as it had been in the North, then everything that happened would make sense.

"You're right," Chen Xing admitted, "I took it lightly."

Xiang Shu nodded; it seemed that his presence wasn't diminished by the loss of strength at all. Chen Xing also discovered that only Xiang Shu's physical strength was eroded; his mind was still as clear as before —— not at all resembling the usual description of "losing both his yin and yang souls."

Thus, Chen Xing revised his prescription and requested a Xie family's person to go buy the medicine ingredients. He excluded several medicines prescribed by Xie Daoyun; he mainly focused on enhancing physical strength. Xie An came to them as usual, inviting Chen Xing and Xiang Shu to have a meal. Chen Xing began to inquire whether there were any traces of strange people in Jiankang, Danyang, Kuaiji, and Moling in the past year

"No." Xie An thought about it and said, "What's the matter? I heard you went to see Daoyun yesterday?"

Chen Xing and Xiang Shu had a simple discussion earlier and they decided to leave today to conduct a serious investigation. There could be no more delay, so he said, "These days, we won't bother you anymore. We have to go out."

Xie An said to Chen Xing, "I've dispatched someone to Kuaiji a few days ago to find a place where the Acala Blade's documents were located. I think they'll be back today, or in one or two days. Wait a bit longer?"

Xiang Shu: "The matter at hand is more important, so keep that for now. Maybe, we can run into them in Kuaiji, too."

Xie An was about to say something but then hesitated. After a while, he asked again, "Is there anything I can do to help? Why are you in such a hurry to leave?"

Actually, Chen Xing didn't suspect Xie An. If Xie An were really scheming against them, he wouldn't wait until this moment. Yet, the fewer people knew about this matter of Xiang Shu losing all of his strength, the better. As a result, he only said that it was related to the plague. When Xie An heard about it, he unhurriedly nodded. Right at this moment, Xie Daoyun came together with Gu Qing.

"Better?" Xie Daoyun said as soon as she entered the door. She nodded to Xie An and did the courtesy before going to check Xiang Shu's pulse and glanced at Chen Xing. Chen Xing slowly shook his head.

"Not the case," Chen Xing replied at once.

Dinghai’s 2nd volume (simplified version) is out now! And they’re gorgeous! THE FILE… THE DOLL… Anyway, here’s a pic of it from Weibo since mine hasn’t arrived yet. Also, unlike the 1st volume, this one actually has an extra and it’s about XIANG SHU’S CHI LE CHUAN’S DAYS BEFORE MEETING CHEN XING 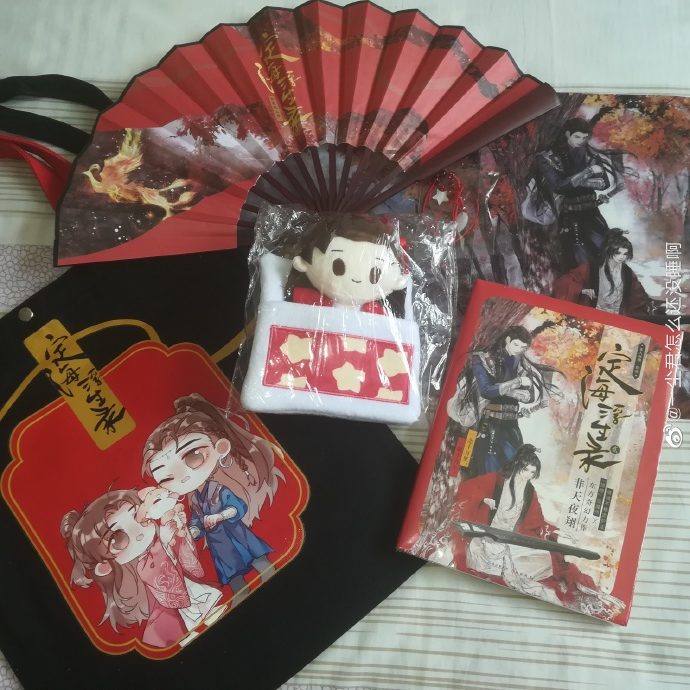 Your local tree hugger. Come get your tree! They're all lovely =￣ω￣=

Fic writer, editor, and translator for GHOFD, PUBG, Fanservice Paradox, and other projects.

“Ryuusei liked watching me play soccer. I scored a goal for him in front of some tourists that day. I kicked the ball from the court that passed through the iron ring used in matches, and perhaps, at that time, I already liked him……I was willing to dedicate the rest of my life, and even sacrifice my life, to my one and only god.”